The Making of Nineteen Fifty-Six: A Q&A with Tionna Taite

This story was originally published in The Crimson White. 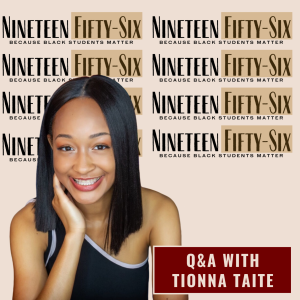 At the helm of Nineteen Fifty-Six, the new UA magazine that focuses on celebrating Black excellence, culture and students, Editor-In-Chief Tionna Taite sits poised to enact change. After working closely with the Office of Student Media, the sophomore news media major is prepared to create a magazine that will “educate students from all backgrounds on culturally-important issues and topics,” and give a voice to underrepresented students.

A: Nineteen Fifty-Six came to be after I created a blog called “Becoming Black Excellence.” It was to offer minority students, with a focus on Black students, educational resources and to also provide insights into my college experience. That led to me thinking about if there were any outlets and opportunities on campus – specifically in the media department – that granted Black students the opportunity to share their stories and to gain experience and expertise in the digital media career field and in a magazine outlet.

A: The title of Nineteen Fifty-Six – It came about because I wanted the magazine to continue to flourish and thrive even after I left the University, and I felt like, in order to do that, I should try to find a way to also connect it to the history of the University specifically involving Black students.

So, I already knew about Autherine Lucy Foster, and I found out that 1956 was the year that she was officially allowed to enroll at The University of Alabama. I knew that she had applied previously to that, and after they found out that she was Black, they did not let her attend until she came back and fought for her right to be officially enrolled. So, I decided that 1956 was a good title for the magazine because it was so pivotal and played a huge role in allowing Black students to finally be able to attend The University of Alabama. Even though she was not allowed to stay, she made the first step and the first action that ultimately led to our students that we have on campus today, as well as people like Vivian Malone, who was the first Black student to graduate from The University of Alabama.

Q: Who were some people you felt like were key to creating Nineteen Fifty-Six?

A: The first people I brought the idea to were my parents who urged me to create an action plan to establish Nineteen Fifty-Six. Mr. Mark Mayfield and Mrs. Traci Mitchell [from the Office of Student Media] are two of the top people that ultimately helped me take the next step in terms of just determining who I should reach out to and what my next steps should be. Mr. Terry Siggers also helped a lot. He helped me create the website where the application link is, and he’s also been providing me guidance on what to use to continue to build the website, and he set up the social media accounts as well.

So, I will say those were the first three initial people who have helped in terms of physical aspects of the magazine, but I’ve also had people [at] the University who I’ve just shared the proposal with, who gave their sounding support in terms of the magazine.

Q: What can we expect from the first issue of Nineteen Fifty-Six Magazine?

A: With the culture section, of course, I want to talk about cultural topics, also some local and national news and things that are happening [at] the University that pertain to the Black community.

And for the feature section, I definitely want to hone in and focus on our students, our Black student-athletes, our alumni, our organizations and also other people who have been making founding efforts throughout the University, who might not get the attention that they really deserve or that they might be overlooked in other publications.

Q: Where did you draw inspiration from?

I also looked back at some of the Jet Magazines that I had and tried to come up with sections that speak to our students and speak to our community as a whole.

Q: How many issues will Nineteen Fifty-Six have this fall?

Q: What are you most excited about?

A: I’m really excited about just working with the students on campus. I’ve been going through the applications currently, and it’s just really exciting to see how excited that the students are to be a part of Nineteen Fifty-Six.

I’ve been reading about how some of them, even if they don’t have the experience, they just want to be involved in the publication because they feel like it will give not only them an opportunity to share their voice and be heard, but also other people on campus. Also, one of the things I want to work with the students on is just gaining experience. They can also be able to say they were able to take part in something that was very pivotal at The University of Alabama during 2020.

Q: What would you say to students who are underrepresented at UA?

A: I would say to them that Nineteen Fifty-Six Magazine is definitely a first step in trying to feel more represented on campus. But also, if they see a void on campus that needs to be filled, instead of just waiting for someone else to do it, just know that they are just as capable to be able to enact that change, establish that program. It doesn’t have to be something small; it can be something large, if that’s something they want to do.

It could be as simple as forming a group of friends who just meet up and talk and discuss their experiences on campus and help uplift each other and talk about things that other publications don’t discuss or other programs on campus don’t discuss. But definitely reaching out to older people on campus within the minority group whether they’re Black students or not, and asking them about programs that might be beneficial to them and just reaching out just to hear about advice and guidance that they may have to lend.

Q: Where would you like to see Nineteen Fifty-Six go in the future?

A: I would like Nineteen Fifty-Six Magazine to not just be known on campus, but to also be known throughout the community and even in the state. I would like other [Predominantly White Institutions] to reach and take from what 1956 magazine has done and see that they can enact something similar on their campuses that might be beneficial to their students.

Q: How would you describe your first issue?

A: I want it to be a game-changer. I want [the digital magazine] to be something that causes change, that creates a space for students on campus, but also educates outside of the Black community, educates students on cultural topics too. [I want it to] educate some about things that they might not realize are going on in the world and affect our Black students because they’re not a part of that minority group.

Ultramarathons and Ideas Worth Spreading